Since April 1, 2014, when the Krzystek’s List had its premiere on the internet, the website has been visited by over 185,000 users (google analytics data). When the contents of the List could be downloaded as a PDF file for the first time in December 2016, over 6,000 persons have benefited from this. The List mean also thousands of emails received from families of airmen asking for help in determining the war stories of their loved ones, as well with information about them (over 1,100 people have shared photos for publication on the website). It is a hundreds of hours spent in archives in London and Warsaw. A result of work of many researchers.

Along with the growing interest in the List, we regret to say that we are increasingly encountering situations that should not have happened. It is not allowed, for example, to publish photos copied from the List without providing sources or even to remove elements indicating the origin of the photo (in the case of pictures published on the List, it is a checkerboard, please click on the picture below). 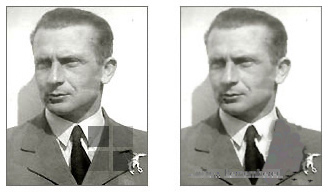 It is not allowed to copy the List, the PDF content in whole or in a significant part, without our consent. It is even more shameful to publish the List or the study by Anna and Tadeusz Krzystek “Polskie Siły Powietrzne w Wielkiej Brytanii w latach 1940-1947” (Polish Air Force in Great Britain in the years 1940-1947) as one’s own work, which is a clear violation of copyright and the so-called sui generis right.

Above record of air observer Stefan Alberti published as work of somebody else. All over 17,000 records from original Krzystek’s work were copied and signed as prepared by other author (please click on the image). Please check also with last edition of Tadeusz Krzystek work dated on December 22, 2012 available for download as a PDF file Krzystek PSP w Wielkiej Brytanii.pdf, 8.5 MB (Tadeusz Krzystek prepared only Polish version of his work).

We ask that anyone who would like to use the information published on the List on a larger scope contact us before doing so. We are happy to help, share materials which we have. In special cases we can prepare the content of the List in the XLS file format which greatly facilitates sorting and viewing data.

On the webpage we published a cover of 3rd edition of a book „Polskie Siły Powietrzne w Wielkiej Brytanii w latach 1940-1947”, Stratus, Sandomierz, 2012.